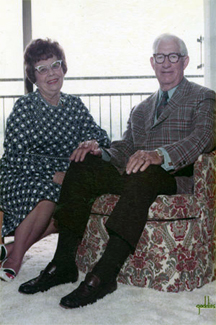 When Robert S. and Katharine Bell established the Bell Trust in 1956, they probably never dreamed that one day those funds would be used to assist churches all over the world.

Robert, an elder of the Preston Road Church of Christ in Dallas, Texas and the chairman of the board of Wyatt Cafeterias, was a generous friend to countless good causes. He recognized that he had been blessed with considerable resources, and he strongly believed that he would be judged by how he used his blessings, both before and after he died.

Robert and Katharine had a special fondness for ministers and missionaries. They traveled around the world to counsel and encourage them. They also helped to establish the Preston Road School of Preaching.

Since 1956, the Bell Trust has helped to support hundreds of ministers and missionaries. More than $33 million has been contributed to thousands of projects “for the advancement of religious, missionary and charitable works of the church.”

Their generosity continues beyond their lifetime as they contribute to the spreading of the good news of Jesus Christ throughout the world.